I’m on the way to the dentist this morning. I’ve opened up my white digital canvas to throw down some sentences, when my own words float back to me. 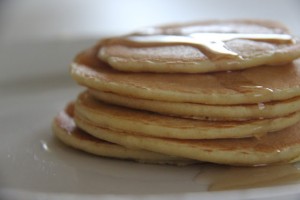 The other morning when my husband tried to get me to buy the idea that he didn’t know how to make pancakes, I had said to him something I had heard before, something like: “‘I don’t know how’ is really just ‘I don’t wanna’ in disguise.” He listened to me. Saw his immense capability, in breakfast-making and in all things, and proceeded to make delicious pancakes with cherries and Vermont maple syrup. I think of that now as I sit down to write and, sure enough, there they are: that chorus of “but I don’t know how”. And then I remember, oh yeah, it’s no more difficult than making pancakes.

For the last several years I have been studying an approach to being present in my life. Taught by masters of living in the moment, Ariel and Shya Kane, I have become skillful at engaging in my life, instead of thinking about it. Consequently, my life has become a rich, colorful adventure, instead of a pale struggle of second-guessing. I notice now the various commentary that passes through my mind, but no longer operate like it is the truth, especially when it says things like “I don’t know how to write a blog.” The task at hand, be it pancakes or writing, isn’t hard – it’s just new. Like each moment is new. And there is a sweet grace that appears when you let go of trying to control and anticipate your life, when you stop listening to the story of your inadequacies and instead just meet whatever shows up in the next moment with the certainty that you and I are supremely capable of handling whatever it is, and which right now, for me, involves pushing the “Publish” button.