Transcending my Inner-Brat and Meeting my Mom

One of the many brilliant bits of wisdom I have learned from teachers Ariel and Shya Kane is this:

“Enlightenment is overcoming your bratty nature.”

But I have to admit, until the other day, I never really, fully understood what it meant.

My mom is an amazing lady.  She has unquestioningly supported every creative pursuit I have undertaken, championed my passions and my interests over the years and has always been there with an ear or a shoulder whenever I needed one.  She also endured, as all parents do, that trying stretch of years in a child’s life called adolescence.  As teenagers go, you could argue that overall, I was pretty well-behaved; a few broken curfews, a bit of underage drinking, and well, I did move in with a boyfriend who was 12 years my senior when I was a senior in high school.  Though I’m sure all of these things spiked her blood pressure, and probably lead to a migraine or two, by all accounts I was more precocious than irresponsible, so even when I was determined to do something stupid, she could at least be assured that I would be smart about it.

She and I both survived my teen years and sailed forward into adulthood – and in many ways our parent-child dynamic grew into a more equal friendship between two grown women.  But what I didn’t realize until the other day, was that there was still a bratty teenager lurking inside.  I was quietly, secretly reserving the right to blame her when I was feeling upset, to instantly revoke her status as my equal and turn her back into “my mom”.

Recently, I took a leap of faith in myself and left a secure (albeit part-time) employment situation, to embrace new freelance projects, which are brimming with possibility and opportunity, but which are much less concrete and immediately financially certain.  I have made a habit, though, out of trusting, not only my gut and my intuition, but also the universe and its abundance, so I am clear in my bones that this was the right move at the right time.

But that doesn’t mean that my mind didn’t immediately start trumpeting cliched, cautionary sayings, encouraging me to curb my boldness and jump back into my box. “A bird in hand is better than two in the bush”, it said.  And I started to listen to it.  Listening to your thoughts is like a really unfortunate game of dominos, one thought about your supposed “limitations” tips over the next, which tips over the next and pretty soon you’ve determined that you are incapable of anything, have no value or worth whatsoever and should probably just crawl into bed and pull the covers over your head for the rest of your life.

Then my mom called.  We chatted about this and that, and then, whoops – she inquired about my upcoming projects.  Out of nowhere, came my inner-brat. “Moo-ooom. Why are you attacking me?” The pitch in my voice raised two notches and a hint of a whine became detectable.  “I have a lot of projects going on and I’m sorry if it doesn’t sound that way to you, but I’m really proud of myself and my work and I shouldn’t have to defend myself to you.”

In the past, that would have been enough to raise the defenses and launch a full-on fight.  But, now, in a refreshing, brilliant stroke of directness she simply responded, with both compassion and clarity, “Ah. You are upset. If you weren’t, you wouldn’t offend yourself with my asking about your work.”

My upset had nothing to do with her questions.  The insecurity and defensiveness was my own, stirred up inside me, for whatever reason.  It had been more convenient, however, to shuck off responsibility and become 13 again. The helpless victim of unfair circumstances and perpetually unsupportive parental units.

And then enlightenment struck.  I heard, really heard, what she was saying.  I felt the God’s honest truth that her questions were born out of a genuine interest in my life and that my reaction was born out of  fear of the creative unknown.  If I wasn’t already upset in myself, I would have been excited by her interest, rather than offended by her “intrusiveness”.

In a second, I saw all that.  I apologized.  She forgave me, and instantly, we were closer than ever before. 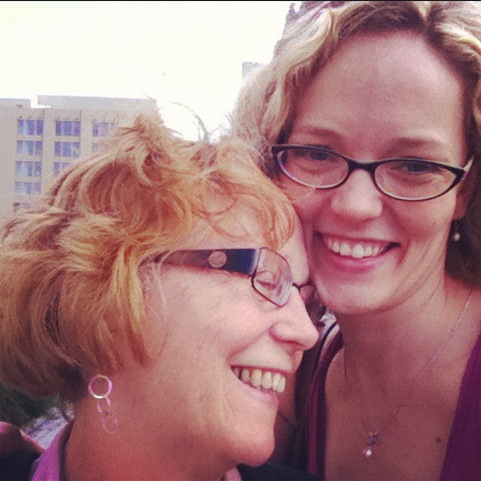 She and I have swapped a few voicemails since that chat and they have been so sweet, like love letters.  I see the brilliance and the wisdom and the big heart of this woman who happens to be my mother.  And because I am seeing the truth, rather than listening to my thoughts, I also see that the apple doesn’t fall far from the tree.